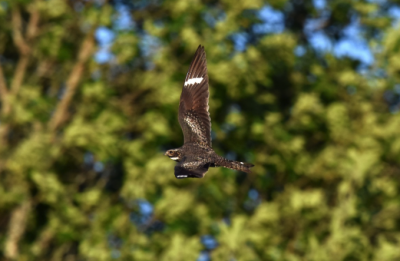 Common Nighthawks are superb aerialists that spot moths, flies, queen ants, beetles, grasshoppers, and other insects in flight and then scoop them out of the air (they’ve been seen drinking by flying over the water’s surface with their bills open). They generally feed at dawn and dusk, but they will zero in on the clouds of insects that are attracted to a street light or to lights over a sports stadium. Like other aerial insectivores, their fall migration is driven by food availability, and like other aerial insectivores (including swallows, swifts, and flycatchers), most nighthawks leave Wisconsin by the early days of September. Big flocks of migrating nighthawks may be seen feeding low and erratically over wetlands and along lakeshores.

That’s why seeing them during the raptor count in early October is startling.  On three dates in the first week of October, we watched as small groups of Common Nighthawks totaling 40 birds flew around the hawk tower (a wrap-up of the past two fall raptor counts will appear in the January-February newsletter).

Common Nighthawks (Chodeiles minor) are not hawks -- like Whip-poor-wills, they’re members of the Goatsucker or Nightjar family Caprimulgidae, a family whose members have wide mouths rimmed by tiny bills. The genus name Chodeiles comes from two Greek words that mean “a dance with music in the evening.” They’re also called Bullbats, because they look bat-like and their wings sometimes make a sound like a bull, Mosquito Hawks, and “Bugeaters” (Nebraska was briefly called “the Bugeater State,” and a few of its sports teams have carried that nickname).

At 9” to 10” long, they’re a little smaller than a Blue Jay, but with long, slim, angular wings, a large head, short neck, and short legs. They are brilliantly camouflaged, and it takes a good eye to spot a nighthawk that’s perched horizontally on a branch or on the ground (see the slideshow here).  Their “peent” call is reminiscent of a Woodcock’s, but woodcocks call from the ground and nighthawks from the air.

They breed from coast to coast and from Central America well into Canada.  Beaches, forest clearings, arid country, grasslands, and rock outcroppings are their historic nest sites, but they’ve adapted to gravel rooftops in cities and suburbs. Males are territorial; they court by circling high into the air and then going into a steep dive. Air rushing through their wing feathers as they pull out of the dive makes the “boom” sound that gave them the name “bullbat.” To hear the peent, boom, and other vocalizations, click here.

A female incubates two eggs that she lays on bare ground.  The nestlings are “semi-precocial” at hatching; with eyes open and with sparse down feathers, they are a little more active than a newly-hatched Blue Jay, and they can move toward the female when they are only a day old. Both parents feed them, and both defend the nest. Young birds can fly by 18 days, and can fly well by 25 to 30 days.

Despite their cryptic coloration, adults, nestlings, and eggs are preyed on by terrestrial predators like domestic dogs and cats, coyotes, skunks, raccoons, and snakes, and from the air by crows, gulls, owls, and hawks. Although the agile adults make difficult targets, we watched one day as a Peregrine Falcon detoured toward a nighthawk as both approached the tower.  The Peregrine wasn’t serious, and the nighthawk only swerved a little, but in the western part of their range, Peregrines routinely prey on Nighthawks.

It’s hard to imagine that the migratory routes and final destinations of birds that move south in such conspicuous flocks are still somewhat of a mystery, but not much is known about their winter range and habitat needs. They are one of the long-distance champions among North American birds, many traveling as far south as Argentina, and some have flown off course to the British Isles, Iceland, and the Faroe Islands.

For a variety of reasons, populations of aerial insectivore species are declining (link to Observatory posts about aerial insectivores?).Although Common Nighthawks can be hard to count because many bird surveys happen at a time when the birds aren’t active, studies indicate that their numbers have dropped by more than 60% in the past half-century. Habitat loss, fire suppression, communication towers, decreasing insect populations, and changing agricultural practices have taken their toll, and gravel rooftops are giving way to less-desirable rubber roofs. Car-bird collisions also take their toll.

A century ago, when shooting hawks was a sport, Common Nighthawks were along the bird species that were targeted by people who didn’t understand the importance of predators and who hunted them because of the word “hawk” in their name. In fact, because they were “hawks,” some people believed that they preyed on poultry. An item in the September 6, 1878 Charlotte [North Carolina] Observerannounced that “Bullbat shooting is now ‘on,’ and the amateur sportsmen are waging warfare upon them. It generally takes fifteen shots to bring down one bullbat.” Public sentiment was turning by the end of the 19th century, but in 1903, the Observer took the newly-formed Mecklenburg Audubon Society to task over its support of a new law that protected songbirds (including Common Nighthawks) and regulated the hunting of game birds. An editorial suggested that “the voiceless unbeautiful but sportful [sic] and toothsome bullbat, whose numbers seem in no way diminished by the annual depredations of the sportsmen” should be considered bats or hawks until “the Legislature can right this mistake.” See the story here.