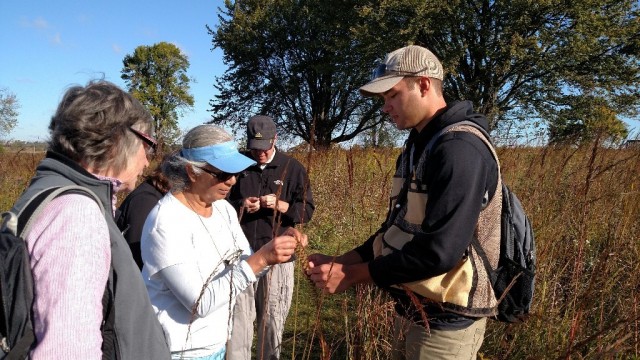 October is known as the “Harvest Month,” and that is no exception for the OWLT stewardship team. On a fine but breezy morning, Josh Schlicht, OWLT Stewardship Coordinator, met a group of volunteers assembled at FBMP who were eager to assist in an inaugural seed-collecting program at OWLT properties.

Josh, a wildlife ecology and biology major from UW-Stevens Point, had a contagious enthusiasm for the project at hand, and soon volunteers were organized with brown paper bags – each labelled with the species to be collected. Instructions were “to leave 25-30% of the seeds on the plants for birds and other wildlife to eat.” That has been part of the focus at FBMP – to create a patchwork quilt of plants that would nourish and restore migratory birds during a stopover and provide food and shelter for other animals. (See the success story of Black-throated Blue Warbler in this newsletter.)

Purple coneflower, penstemon, golden Alexanders, blazing star, nodding onions, and brown-eyed Susans were on the docket for this day. These would be added to a growing collection of over 50 species that are being carefully spread on trays to dry and will go through a stratification process at 30–38° Fahrenheit.

According to Wikipedia, “In horticulture, stratification is the process of pretreating seeds to simulate natural conditions that a seed must endure before germination. Many seed species have an embryonic dormancy phase, and generally will not sprout until this dormancy is broken.” OWLT carries out these necessary procedures at the Kratzsch Conservancy, one of the Land Trust’s properties.

As seeds were collected by the volunteers, questions were answered and knowledge shared. Josh enumerated a number of compelling reasons why OWLT has begun seed collecting at its properties. “It’s important to increase diversity at land trust properties,” he said. “Through scattering seeds, new plants can be introduced to spots that are currently a mono-culture – or to sites that are battlefields combatting invasives. Aggressive natives like cup plant and saw tooth sunflower help combat invasives and are often deployed to control canary reed grass, Canada thistle, and Queen Anne’s Lace.”

As the seed bank grows, hopes are to have enough surplus to begin sharing with other land trust organizations and perhaps, in return, receive seeds of native species not present on OWLT properties.

But it’s not enough simply to have a large storehouse of seeds to sow. To reclaim land for natives, there needs to be a burn that will knock down the invasives long enough to give the new natives a chance to germinate, and many sections of the properties have regularly scheduled burns.

According to Prairie Moon Nursery, a long-term management plan that includes regular controlled burns is pivotal to the success of establishing a prairie. “If a planting is not periodically burned, a thatch layer can build up over the years, causing some native species to grow poorly – or die out. Burning in March or April gives the native plants a competitive edge over weeds.”

Once a burn has been completed, new prairie plant seed can be introduced by drilling holes or casting over open ground as a cover crop.

The efforts to establish and maintain native plants and prairies on land trust properties requires vigilance, determination, expertise, and many hours to accomplish. This first year of seed collecting was certainly successful, and as OWLT looks to 2018, it is hoped that many more volunteers will join those who are already active in supporting this important initiative.