Eurasian Collared Dove by Kate Redmond
Wisconsin’s first Eurasian Collared Dove was found at the home of WGLBBO founder Noel Cutright in May of 1998, a newcomer to the state and a relative newcomer to the US. This native of India, which had already colonized Europe, arrived in the Bahamas in 1974, and spread to the Gulf States a dozen years later, showed the same, strong northwest orientation in its American expansion that it had in Europe. Although it prefers warmer weather, it occurs within the Arctic Circle in Norway and has been seen in most of North America, with the exception of the Northeast. Wisconsin’s first breeding record was in 2004.

Good news or bad? They compete with Mourning Doves for the same diet, but their presence seems not to threaten Mourning Doves until Collared Doves build up their numbers. Where their populations are dense in Florida, Collared Doves chase other species from bird feeders. They eat fruits, grains, and seeds, including some agricultural crops.

Collared doves are larger and paler than our native Mourning Doves, which they resemble except for a dark curved band around the back of the Collared Dove’s neck and less-pointed tail feathers. They are not migratory and are relentless colonizers, expected to occupy the whole state eventually (because of the increasing numbers of bird feeders, grain left in agricultural fields, and warmer winters, fewer Mourning Doves migrate these days). They prefer urban, suburban and agricultural habitats and will come to bird feeders, and while the southern third of the state accounts for most of the sightings, the doves have traveled to Green Bay and beyond.

When the male is courting, he flies using deep parrot-like, wing-clapping beats, looping toward earth and giving a sharp, three-note call. Like the Mourning Dove, the Collared Dove builds a flimsy nest, usually in a tree or shrub, for its two eggs, and it may nest several times during the summer. Eggs hatch in about two weeks, and the young leave the nest about 18 days after hatching. 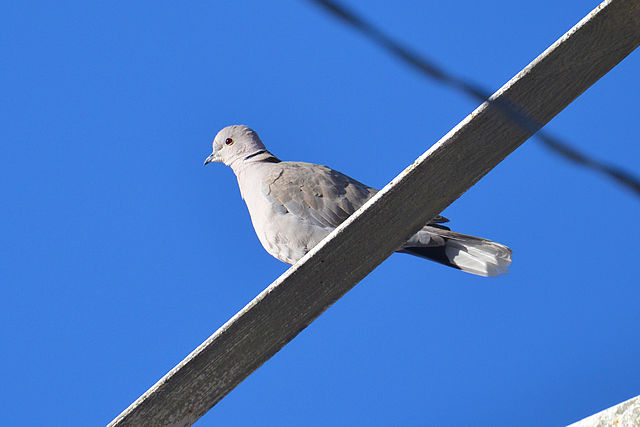