Forest Beach Bird # 251 by Kate Redmond
Scissor-tailed Flycatchers commonly grace the tops of barb-wire fences and utility lines – in Texas. Range maps show them breeding as far north as southwestern Missouri and wandering into central Illinois after nesting, and they are the State Bird of Oklahoma. But – a flyover at the Hawk Tower at Forest Beach Migratory Preserve? On Oct. 8 a Scissor-tailed Flycatcher became the 251st bird species recorded at FBMP.

They are in a group called the Tyrant flycatchers, so-called because they defend their territories fiercely. At 10” to 14” long, they are a little larger than a Blue Jay, and the long tails of the male may measure an additional 14” (females’ tails are shorter). They are gray, with black on the wings and tail, and startling salmon pink feathers on the flanks and axillary area (“armpits”). The long tail is displayed in courtship and also acts as a rudder while the bird is chasing insects. Scissor-tail flight defines “graceful.”

Scissor-tailed Flycatchers feed on insects that they spot from a perch and intercept in flight with their bill (a behavior called “hawking”). They’ll also pick up insects that they see on leaves or on the ground. When insects are scarce, they’ll eat berries. One or two stray Scissortails, called vagrants, arrive in Wisconsin each year, and they typically don’t stay in one spot for long http://archive.jsonline.com/blogs/sports/176824971.html. 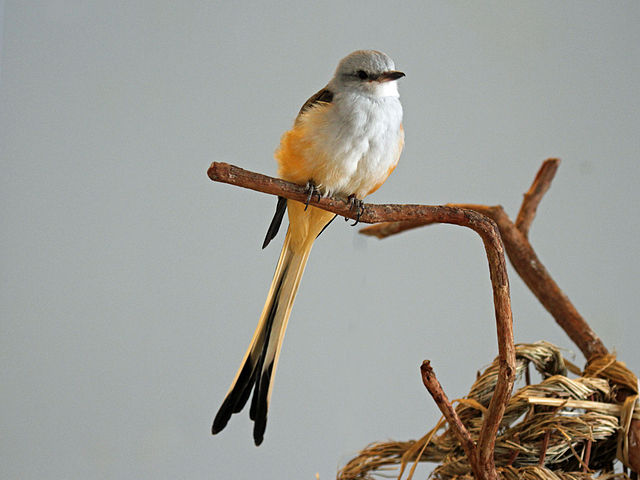