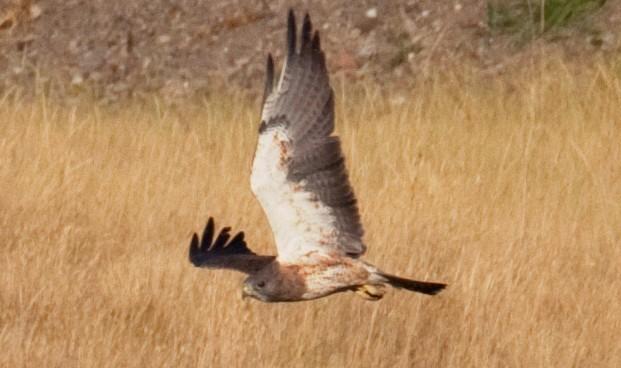 In southeastern Wisconsin, a large-ish buteo is always a Red-tailed Hawk – except when it isn’t. Buteos are a group of “bulky” hawks with long, wide wings and a short tail that is usually spread in a fan. In our area, buteos are represented by the very common Red-tailed Hawk (its white belly conspicuous as it wheels above fields or sits on fence poles and in trees), the smaller and much-less-common Red-shouldered and Broad-winged Hawks, and the larger, winter-resident Rough-legged Hawk.

Bird species #255 at FBMP was a Swainson’s Hawk (Buteo swainsoni), an unexpected, Red-tail-sized visitor. The Cornell Lab of Ornithology’s “All About Birds” website calls them “A classic species of the open country of the Great Plains and West.” The Wisconsin Society for Ornithology lists their status here as “casual,” meaning that there is “at least one record every one to five years.”

Swainson’s Hawks are aerial magic. Slim, holding their long, falcon-like wings at a slight dihedral (a wide “V”), they soar on updrafts, tip back and forth as they patrol the prairie looking for prey, catch insects in flight, or loop and dive in courtship. There are light and dark color phases (morphs) with some intergrading, plus juvenile plumages, and they can be mistaken for other southern and southwestern buteos in their range, but nothing else looks like them in southeastern Wisconsin.

They are called Grasshopper or Locust Hawks, a nod to the insects that make up a large percentage of their diet, especially on their wintering grounds. Swainson’s Hawks hunt for them from the air (they may grab a grasshopper or dragonfly with a foot and transfer it to their beak in flight), on the ground, or from a perch, and so they are beneficial to agriculture. They feed their nestlings on larger stuff – snakes, lizards, toads, rodents, and even the occasional bird and bat (their breeding range corresponds with the ranges of the various pocket gophers on the Great Plains). They follow plows and harvesters, and they patrol the edges of prairie fires for escaping prey.

Except for the breeding season, when they are territorial, Swainson’s Hawks are social, which is uncommon in raptors.

These are long-distance migrants, clocking more miles during migration than almost any other raptor (the Tundra Peregrine holds the record). It’s a 12,000-mile-plus round trip to their wintering grounds in Argentina and back again, and each leg of the trip takes two months.

Their migrations are spectacular, with massive flights of Swainson’s Hawks crossing the Rio Grande, following the land mass of Central America, and passing over the Isthmus of Panama by the hundreds of thousands each season. In their book Eagles, Hawks, and Falcons of the World, Brown and Amedon rank the Swainson’s Hawk migration through Central America among “the most impressive avian gatherings in North America, since the demise of the Passenger Pigeon.”

By the mid-20th century, Swainson’s Hawk populations had plummeted alarmingly. A number of peripheral causes were identified, some of which are still problems today. Among them were changing agricultural practices, elimination of grasshoppers and ground squirrels from agricultural land, shooting, hailstorms, contact with power lines (and now, wind turbines), and habitat loss. In one catastrophic episode, exposure to a pesticide in Argentina killed 35,000 hawks in a single winter. Banning the pesticide and establishing a network of Important Bird Areas and National Parks in their wintering grounds have aided their slow recovery.