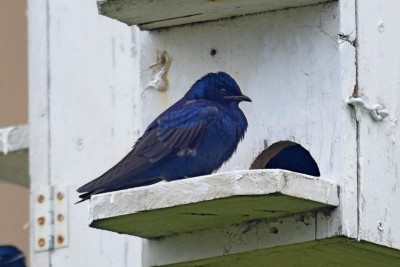 Purple Martins are one of the most beloved birds in North America.  One reason for their popularity is that, at least in the eastern half of the continent, they carry on their lives in man-made birdhouses in our back yards.  Martins are in the Swallow family (Hirundinidae) and they are, at almost 8” long (Cardinal-sized), the largest of our swallows.  They are vocal, swift, agile and handsome, and they astound us with their aerial maneuvering, both feeding and drinking on the fly.

People also love them because they have “site fidelity,” which means that the birds that hatched in your Martin house last year will likely return, with their parents, this year.  Unlike most other songbirds, they are comfortable nesting shoulder-to-shoulder with other Martins, and they form huge roosting flocks after their chicks are fledged and while on their wintering grounds.

Throughout their range, Purple Martins (Progne subis) are found near water in open areas, grasslands, parks, dunes, suburbs, etc.  They are cavity nesters; in the eastern part of their range, they’re almost entirely dependent on humans for their housing, but in the West, they nest in dead snags, in holes made by woodpeckers, in other natural cavities along woodland edges and clearings, and even in saguaro cactuses.  The western birds may form small colonies, but pairs will also nest solo.

The question is, of course, “Where did Purple Martins nest before people started making houses for them?”  From the early 1700s on, European explorers wrote about seeing Martins living in hollowed-out gourds in Indian villages, but by then, Martin houses were also common at farm houses and taverns (Audubon observed that “the handsomer the box, the better does the inn generally prove to be.”).  Did Native Americans teach the newcomers, or vice versa?  We may never know the answer, but no matter who started it, Martins have been using man-made nest sites for a long time.

Another reason that people like them is that we’ve been told that a Martin may eat as many as 2,000 mosquitoes each day.  In fact, they feed on many kinds of flying insects - beetles, grasshoppers, butterflies and moths, wasps and bees, plus lots of spiders, dragonflies, and damselflies.  Purple Martins catch their prey on the wing, and while they may patrol just above the surface of the water, they also hunt up to heights of 150 feet and more – the highest of the swallow species, and higher than mosquitoes normally fly.  In the southeastern US they scoop up impressive numbers of fire ant queens on the queens’ nuptial flights.

Purple Martins overwinter in central South America, and they take their time getting there, covering 5,000 miles in four to six weeks.  Older males (“Martin Scouts”) return from their wintering grounds first, followed by older females, and, finally, by last year’s young.  They stake a claim to a few nest sites (because they nest communally, the only territory the eastern birds defend is a compartment or two in a nest box), and the male’s bubbly “dawn song” invites more Martins to join the colony.  They lay three to six eggs, which the male helps incubate (a little) for about 2 ½ weeks.  The young are fledged a month after hatching, but they hang around because their parents continue to feed them.  There’s a single brood per summer in Wisconsin, and most Martins have left the state by September 1.

Martin populations have been declining over their range, particularly in the West.  Extended wet or cold snaps when insects disappear, removal of dead trees, collisions, pesticides, and competition from other cavity nesters, especially from non-native Starlings and House Sparrows, are all factors.

Purple Martins are one of a group of birds called “Aerial Insectivores,” many of whose numbers are also decreasing, and the Western Great Lakes Bird and Bat Observatory has been working to raise awareness about their plight. For more information on the Observatory's work, click here.  In Wisconsin, Aerial Insectivores include about 19 species of swallows, swifts, flycatchers, and nightjars (Common Nighthawks, Chuck-will’s-widows and Whip-poor-wills).  What they have in common is that they are fueled by flying insects, and especially by “aeroplankton,” masses of tiny invertebrates that float through the air.

Entomologist Gilbert Waldbauer did the math in the 1990’s and figured out that on a day in May, a square-mile column of air that starts 20 feet above the surface and stretches up 500 feet will contain 32 million arthropods (and an amazing number of them are spiders!).  He wrote that “This amounts to 6 arthropods per 10 cubic yards of air.”  The density of aeroplankton decreases with altitude and at night – nocturnal insectivores (Whip-poor-wills and Common Nighthawks) hunt for bigger prey, like moths.

The problem is that researchers are documenting a serious decline in numbers of insects globally, primarily due to climate change and pesticide use.  Simply put, there are fewer morsels of bird food swimming through the water, crawling over the leaves, and flying around in that air column.  Some studies show that in less than 50 years, insect populations have dropped by more than 50%.  As insect populations plummet, so do those of the many species that depend on them (think of all the birds that hunt insects for their nestlings), including bats.

This is an alarm that has been sounding since the mid-1980’s.  Says Jon McCracken in an article in Birdwatch Canada (2008), “The proverbial clock may well be ticking down on many common species of aerial insectivores in Canada.”  He lists some probable causes – climate-related changes in range or phenology (timing and synchronicity), light pollution, warming water temperatures, and pesticides, especially neonicotinoid pesticides.

He calls Purple Martins “mid-level” foragers (they mostly hunt for prey above 30 feet from the ground) and says that mid and high-level foragers (60-plus feet) are declining more rapidly than lower foragers and “hawkers” - birds that perch on vegetation and fly out to grab insects.

For more information about Purple Martins:

On putting up a Martin house - http://www.birdwatching.com/tips/purplemartin_landlord.html

For more information on aerial insectivores: