What gets birders out of bed and into the field, year after year? For most, it’s the simple act of being out in the field, along with the opportunity to see and hear some amazing animals. And, there’s always the possibility, since birds were issued wings, but not road maps, of spotting a rarity. The Big Sit on October 8? Mission accomplished.

One of the high points of the day was the sighting of several Ross’s Geese in a flock of Canada Geese. Ross’s Geese are a western species that breeds in the High Arctic and along the western shore of Hudson Bay. The Arctic birds overwinter in central California, but the Hudson Bay population, which has been increasing in recent decades, migrates just beyond our borders, through Minnesota and the Dakotas, to parts of northern Mexico, Missouri, Kansas, Oklahoma, Texas, and Louisiana. The state’s first recorded Ross’s Goose was seen by renowned Wisconsin ornithologists Joseph Hickey and Owen Gromme at Horicon Marsh in 1959; a year later, a hunter shot and photographed a bird he identified as a Snow Goose (an easy mistake to make) – the bird was not available for confirmation because it was eaten.

They are petite geese, noticeably smaller than the company they keep. They look like Snow Geese, white with black wing tips, and like Snow Geese, they come in a white and a less common dark/”blue” color phase or morph. Most of the field marks are comparisons to their companion Snow/Blue Geese, and the two species do hybridize. A good comparison is available on the Kentucky Ornithological Society website http://biology.eku.edu/kos/goose_id.htm.

Ross’s Geese are, like the Big Sit birds, usually seen in Wisconsin in flocks of other species of geese that they have joined for migration. On the Wisconsin Society for Ornithology’s checklist of state birds (http://wsobirds.org/checklist-of-wisconsin-birds), their status is listed as “rare/very rare but regular.” 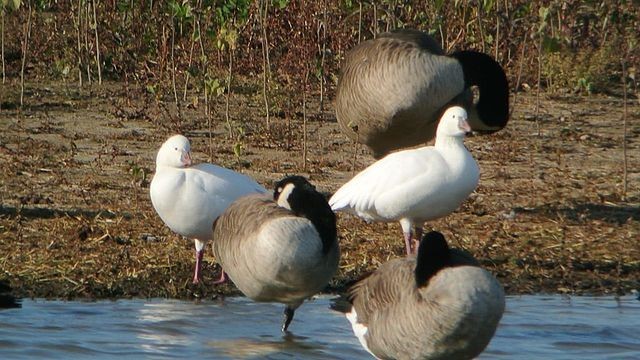