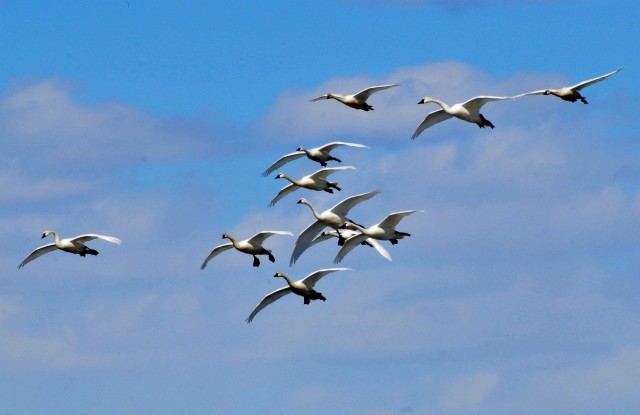 This year marks the 100th anniversary of the Migratory Bird Treaty Act of 1918, a landmark piece of legislation aimed at protecting birds.

To set the stage, at the beginning of the 20th century, bag limits on waterfowl and other game birds were generous (if they existed at all), sometimes allowing hunters to take as many as 75 ducks daily for 150 days. Birds were killed, an estimated five million annually in the late 1890’s, for their feathers, used in women’s hats and other fashion items (https://www.npr.org/sections/npr-history dept/2015/07/15/422860307/hats-off-to-women-who-saved-the-birds).

In some areas, it was a tradition to see how many birds you could shoot on Christmas Day. (This “Christmas Side Hunt” inspired Frank Chapman to launch an alternate tradition: the Christmas Bird Count, in 1900.) Wood Ducks had disappeared from much of their historic range. The Passenger Pigeon, which darkened the skies in uncountable numbers into the mid-1800s, was gone, the victim of habitat destruction and massive overhunting. (Pigeons were shot even while sitting on eggs, and the plump fledglings were killed before they could leave the nest.) The last Passenger Pigeon had died in the Cincinnati Zoo in 1914.

The Migratory Bird Treaty Act of 1918 (MBTA) united the United States and the United Kingdom (on behalf of Canada) in an effort to protect migratory birds, dead or alive, by making it illegal to “pursue, hunt, take, capture, kill, possess, sell, purchase, barter, import, export, or transport any migratory bird, or any part, nest, or egg or any such bird, unless authorized under a permit issued by the Secretary of the Interior;” and the Act also established the government’s role in codifying hunting regulations. It had its roots in the Weeks-McLean Migratory Bird Act of 1913, which attempted to protect songbirds and other migratory birds because of their value as controllers of insect pests. The MBTA passed with bi-partisan support, which it has enjoyed ever since. Like Passenger Pigeons, the number of birds that have benefited from the MBTA in the last century is uncountable.

There have been revisions of the MBTA since 1918. Mexico, Japan, and Russia have signed on; the law was broadened to provide protection for habitat; bird species, including some that don’t actually migrate, were added (and some, like the non-native Mute Swan, were removed); eagle feathers may be possessed by Native American tribes for religious ceremonies, and feathers may be used in Alaskan native artwork; and, controversially, an exemption was made for inadvertent killing of birds during military training and testing exercises. http://www.audubon.org/news/the-history-and-evolution-migratory-bird-treaty-act. Permits are issued for activities like hunting, falconry, taxidermy, education, research, and killing/removal of nuisance birds.

Technically, the law makes it illegal to possess last year’s nests (though songbirds do not re-use them) and even feathers, potentially putting nature centers, Scouts, science teachers, and nature-lovers afoul of the law. Knocking down an occupied robin or swallow nest above your back door is also illegal, and MBTA protection even extends to 19th-century bird dioramas and to old nest and egg collections.

Not everyone is in love with the MBTA. Birds face threats today that didn’t exist 100 years ago—wind farms, power lines, communications towers, oil spills, industrial wastewater ponds, etc. The MBTA allowed wildlife agencies to charge individuals who willfully took birds illegally, and it also provided an incentive for companies and utilities whose operations result in accidental kills (called “incidental takes”) to adopt “best practices.” The historic intent (and proven track record) of the MBTA has been threatened since 2015, when the US Fish and Wildlife Service, the agency that enforces it, announced their plan to reconsider prosecution of “incidental takes” caused by industry practices. In 2017, utilities and other businesses were exempted from accountability and enforcement under the MBTA for killing non-game, migratory birds. As the National Audubon Society points out, this removes any incentives for companies to protect birds.

As of mid-April, 2018, the Interior Department announced that corporations or individuals whose actions result in the accidental killing of birds will not be prosecuted. In an article in the Washington Post, reporter Darryl Fears quotes from the new Interior Department guidelines: “the take [killing] of birds resulting from an activity is not prohibited by the Migratory Bird Treaty Act when the underlying purpose of that activity is not to take birds. ‘For example,’ the guidance said, ‘a person who destroys a structure such as a barn knowing that it is full of baby owls in nests is not liable for killing them.’ All that is relevant is that the landowner undertook an action that did not have the killing of barn owls as its purpose.”

Here’s the full list of protected species: https://www.fws.gov/birds/management/managed-species/migratory-bird-treaty-act-protected-species.php (the first half of the list is “alphabetical,” but if you scroll down about half way, the same birds appear listed taxonomically – ducks, loons, grebes, etc.