When your property list tops 250, the next birds you add tend to be the unexpected species, and that was the case for Forest Beach Migratory Preserve’s 256th species.

In early April, a Trumpeter Swan was spotted on one of the Preserve’s ponds by Waterbird Watch Technician Calvin Brennan, whose usual beat is an observation blind on Lake Michigan at Harrington Beach State Park (http://birdbatclone.ecowebdesign.accountant/what-we-do/waterbird-watch). The swan’s presence celebrates an avian success story.

At four-and-a-half to five-and-a-half feet long, with a wingspread of more than seven feet, and weighing in at 15 to 30 pounds (females are smaller), Trumpeter Swans (Cygnus buccinator) are the largest waterfowl in North America and our heaviest flying bird. The Wisconsin Department of Natural Resources great kids’ website EEK aptly describes them as “a big, beautiful, white bird.”

Trumpeters can be mistaken for our native Tundra Swans (called “Whistling Swans” in older bird books) and for the non-native Mute Swan. Season (we don’t expect to see Tundra Swans in Wisconsin in the summer, but Mute Swans are present), size, posture, and bill color help distinguish the three. For identification tips, see http://www.trumpeterswansociety.org/swan-identification.html. The much-smaller Snow Goose is white, but it has black wing tips, and so does the somewhat-larger White Pelican.

The word buccinator in the Trumpter’s scientific name is Latin for “to trumpet,” and the swan’s call is described as a deep, resonant, and trumpet-like “oh-OH’.’” Swans have a variety of vocalizations that help them to stay in contact with other birds, advertise their territory, and signal alarm (http://www.audubon.org/field-guide/bird/trumpeter-swan).

Historically, Trumpeter Swans bred from Missouri, Illinois, and Indiana through northern Canada and wintered as far south as Texas. John Lawson, exploring North Carolina in 1701, wrote, “Of the swans we have two sorts, the one we call Trompeters...These are the largest sort we have...when spring comes on they go the Lakes to breed. The sort of Swans called Hoopers; are the least.” Explorers in the Detroit River area of Lake Erie during the same period wrote, "There are such large numbers of swans that the rushes among which they are massed might be taken for lilies.”

In 1933, the known population of Trumpeter Swans in the wild dipped below 70, and concerned wildlife biologists swung into action. Trumpeters had been hunted nearly into extinction for their meat and feathers and for their skin, which was used for powder puffs. They were also harmed by the overhunting of muskrats and beavers, whose dams and lodges provide nest platforms for the birds. In the early 1950s, to the relief of conservationists, a previously unknown Pacific population of a few thousand birds was discovered in Alaska.

Trumpeter Swans, which had not been recorded in Wisconsin since 1937, were listed as a State Endangered Species in 1987. As part of the recovery plan, eggs were collected from nests in Alaska, flown to Wisconsin, and incubated at the Milwaukee Zoo. The young birds were then released after being acclimated to the wild. Wisconsin’s population numbers more than 5,000 today, mainly in our northern and central counties. For a great story about the early days of the Wisconsin recovery effort, see http://www.wisconservation.org/white-trumpeter-swans-make-impressive-comeback/. 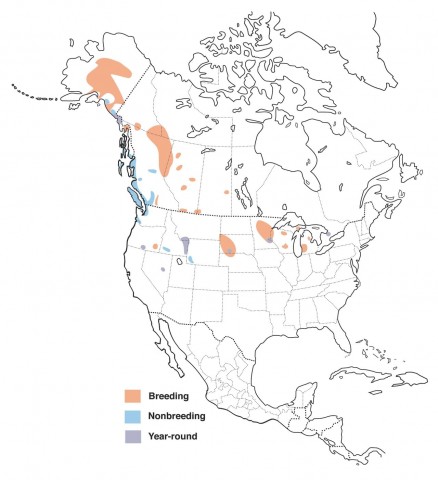 Although many of the more southern breeders are permanent residents, Trumpeters are considered migratory birds because northern populations move south for the winter, flying by day at low altitudes. Trumpeter Swans are found in shallow wetlands, in moving or still waters that have lots of aquatic vegetation. One source noted that while they were once a bird of the prairie potholes, they are more common in wooded areas today. An important requirement for both breeding and wintering grounds is a long stretch of open water—these heavy birds need to run across the top of the water, flapping their wings, for at least 100 yards before they can lift off!

Trumpeters eat aquatic plants like algae, duckweed, sedges, and wild rice, and they “tip up” to pull vegetation out by the roots. They’ll also graze on terrestrial plants like blueberries, grasses, grains, corn, and even potatoes and carrots. Young swans feed on aquatic invertebrates until they are about a month old, and although adults are primarily vegetarian, they will eat small fish and fish eggs.

Trumpeter Swans mate for life—except when they don’t. It’s not a hard-and-fast behavior, and some will take a new mate after the death or departure of the old one. A male and female may form a pair bond at the age of two or three and migrate together, but they may not nest until they are a few years older. They court with raised, quivering wings, bobbing heads, and loud trumpeting, and they are very territorial during nesting season.

Nest sites are usually surrounded by water; nests are made of aquatic vegetation collected mainly by the cob (male) and shaped by the pen (female). She lays an average of four to six eggs and does most of the incubation, and it seems appropriate that the continent’s heaviest flying bird lays an egg that may be the largest of any of today’s flying birds. Rather than warming the eggs by direct contact with the skin on her breast, she covers them with her feet. The young (cygnets) are precocial, covered with down feathers and able to walk immediately after hatching and to swim within a day. Both parents care for the young, and the family stays together for about a year. Trumpeter Swans may live as long as 25 years in the wild.

In our area, swan eggs and cygnets are vulnerable to raccoons, otters, coyotes, mink, foxes, snapping turtles, Great Horned Owls, and Red-tailed Hawks. (Eagles, ravens, mountain lions, bobcat, bears, and wolverines are added to the list in other parts of their range.) With their long, heavy, powerful wings and strong bills, adult Trumpeters can mount a pretty determined defense against predators, especially nest predators, but very aggressive Mute Swans may evict Trumpeters from a wetland.

Other mortality factors are human-related. Swans are susceptible to lead poisoning from accidentally eating even a few lead sinkers or lead shot while browsing on the bottom of the pond. They are killed illegally for fun and are mistaken for game species (it’s illegal to kill any swan in Wisconsin, but Snow Geese are hunted), and they collide with power lines. The National Audubon Society lists them as a species that could be affected by climate change: http://climate.audubon.org/birds/truswa/trumpeter-swan.