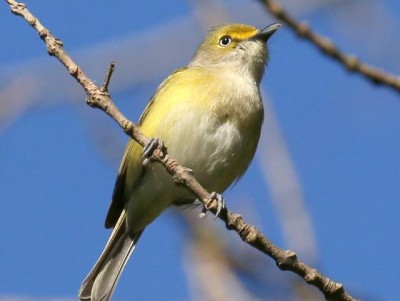 It’s hard enough to see one in Wisconsin in the summertime -- the Wisconsin Society for Ornithology lists them as “uncommon” –- so locating one in fall is a real treat. But one was found at Forest Beach Migratory Preserve during a WSO field trip on October 10. It was bird species number 258 for the property.

Thickets, forest edges, and shrubby grasslands south and east of Wisconsin are the usual haunts of White-eyed Vireos (Vireo griseus) -- the north edge of their range is constantly shifting. They are heard more often than they are seen, and their sharp songs are different from the often-monotonous sounds of other vireos.

In fact, some authors call them “singing machines.” They’re most vocal around dawn and dusk, but they can be heard at any time of day; and they have a variety of songs and calls and can even imitate a few other birds. Their song has been described as “Pik-chicka-weew,” “Chip-a-wheeoo-chip,” “Quick, give me a rain check,” “Who are YOU, now,” and “Spit. And see if I care!” For typical songs and calls, click here. Only the male sings during the breeding season, but the female will sing on the wintering grounds.

As the name suggests, a white iris is their best field mark, but young birds’ eyes are dark.  The eye is surrounded by a yellow spectacle, and the birds’ yellow flanks are also distinctive.

A diet of moths, caterpillars, butterflies, beetles, bugs, grasshoppers and spiders is supplemented by berries during the winter. White-eyed Vireos flit from shrub to shrub, stalking their prey, but they sometimes hover to pick an insect off of a leaf.

Cornell University’s All About Birds website lists a number of “Fun Facts” about White-eyed Vireos, including the facts that they bathe by rubbing their bodies against dewy leaves, and that a wing bone that was found in Florida and identified as that of a White-eyed Vireo turned out to be 400,000 years old!

With a little luck, our Forest Beach vireo has arrived in its winter home in the Southeastern United States, Mexico, Central America, or the Bahamas.

See below for more information on the White-eyed Vireos:
All About Birds
Audubon
Missouri Department of Conservation
Tennessee Wildlife Resources Agency