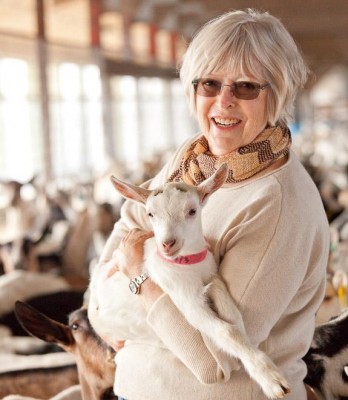 Lynde Uihlein with one of her kids from the Blakesville Dairy. Photo by Sylke Vonk.

Over the decades, Wisconsin has been home to some great conservationists and organizations that are connected to their visions and dreams. Wisconsin can proudly boast the likes of Aldo Leopold (Aldo Leopold Nature Center), Andy Larsen (Riveredge Nature Center) and Noel Cutright (Western Great Lakes Bird and Bat Observatory).

Of great importance to the success of such organizations is the philanthropic visionary who shares the dream and can help fuel the cause. Lynde Uihlein is just such a visionary. A quiet, thoughtful, and private individual, Lynde has, through her intense commitment to conservation, helped found organizations and has sustained important science-based research through her generosity.

In a recent interview with Lynde, I had an opportunity to gain a deeper insight into the accumulated life experiences that have resulted in her passionate advocacy for the conservation of birds, endangered plants, and our freshwater resources.

Two years ago, after a brief retirement from the position, Lynde stepped back into the lead of the Brico Fund, which she founded in 1990. Today, Brico supports many environmental causes, but its lead concern began with water policy. A generous gift to the University of Wisconsin-Milwaukee resulted in building the Center for Water Policy, and Brico also sponsored the creation of the Water Policy Fellowship in Great Lakes Journalism at the university.

Over the years, Lynde says her philanthropic philosophy can best be described as “integrated giving,” and it reflects her “deepest values of what is going on in the world.” That integration can be seen in the ecological thread that connects several of these organizations through their scientific research and monitoring and their focus on areas that are of particular interest to her. She currently serves as board chair for the Center for Plant Conservation, headquartered at San Diego Zoo Global. “Their focus is on the preservation of endangered plant species. They have an extraordinary plant collection based on their 62 affiliate scientific organizations,” Lynde said.

And, that brings us to her third passion -- birds.

Lynde’s interest in birds began early. Childhood memories of waking to the cooing of the doves and the exuberant warbling of the wrens are paired with the knowledge she gained from her father, who hunted ducks and grouse. This awareness took on a more formal aspect when as an adult she took classes from Andy Larsen at Riveredge, where she was introduced to the pecking order established by the birdfeeder flock. Further study in teacher/naturalist courses made her acutely aware of the fragile eco-systems birds inhabit.

When asked why birds matter so much to her, Lynde replied, “They are beautiful, fragile, and determined creatures sharing habitat with me and bringing joy. They are the barometers of the threat to the web of life.”

Lynde’s commitment to birds has been international in scope. She helped found the Tirimbina Rainforest Center in Costa Rica, where she began to think more deeply about bird migration and the capacity of such small beings to travel great distances to get to their breeding grounds. With all of the natural and man-made hazards, this journey is fraught with peril, and providing them with the best opportunity for a successful breeding season became a high priority for her.

Lynde already was active in habitat protection when the opportunity arose for the Ozaukee Washington Land Trust to purchase the Squires Golf Course. “I committed to fund the acquisition with the understanding that OWLT would use the property to create a migratory bird preserve there. That commitment was made to me, and the Land Trust sought out grants to reimagine the golf course, dividing the acreage into specific habitats that would appeal to a variety of migrating species. Noel Cutright was instrumental in laying out the plan. He later formalized his vision with the Western Great Lakes Bird and Bat Observatory, which until late last year was housed in the old clubhouse at Forest Beach Migratory Bird Preserve. I am proud to say that the seed money for the establishment of the Observatory came from me.”

I asked Lynde where her current focus lay. “Afterglow Farm,” she said without hesitation. Today, a preeminent goal of Brico is to assure that Afterglow Farm will be thriving and sustainable for generations to come.  Recently she invited the Observatory to move its Motus tower that tracks migratory species from the soon-to-be-demolished clubhouse to nearby Afterglow Farm. Asked why she offered this new and secure home for a Motus tower, she replied, “As Afterglow Farm evolves, we become more concerned and active in habitat and species protection. We have an ongoing amphibian and herp protections program. Our avian activities have been expanding, and with the addition of the tower, we can contribute beyond our boundaries.”

Asked what progress she sees in bird conservation, pressing concerns as well as reasons for hope, she replied, “Research and technology have provided us with more information, some of it discouraging to imagine. The decline of species and numbers is staggering. Birdwatching has grown as a pastime, so more individuals see the value of birds. We know what we need to do: address climate change, improve habitat, remove man-made construction that is unnecessarily destructive. If I am hopeful, it’s because of organizations like the Western Great Lakes Bird and Bat Observatory.”

There are many places in this world that are better places to live or have the hope of becoming that, thanks to the generosity of Lynde Uihlein. Those of us in Ozaukee County owe her a great debt of gratitude. Please click to learn more about each organization.