In early spring, a pair of Bald Eagles created quite a stir when they appeared to be incubating eggs in a nest in Milwaukee County, becoming the first eagles to do so in a very long time and making Milwaukee County the last of Wisconsin’s 72 counties to host a Bald Eagle nest. A huge, stick nest was constructed in 2021, but the birds didn’t lay eggs, and it’s not uncommon for a pair of young adult eagles to build a practice nest. To give the birds some privacy, the exact location of the nest was not revealed; it’s illegal for observers (or drones) to harass nesting eagles or to approach a nest closer than 300 feet.

The reason for the celebration is a story that began in the 1940’s, when use of the pesticide DDT became widespread. DDT, which breaks down to form the equally-harmful chemical DDE, was found in the soil and water and at all levels of food chains, and eagles and other birds of prey were especially affected.  Everything they ate, and everything their prey had eaten, contained DDT, and as top predators, they experienced a build-up of the chemical, a phenomenon called “biological magnification.” DDT didn’t poison birds directly, but it did mess up their calcium metabolism, which resulted in thinner, weaker egg shells. Eggs broke in the nests as a result of normal incubation. The same thing happened to songbird species like American Robins as earthworms were exposed to DDT in the soil, and their plight was documented by Rachel Carson in her book, Silent Spring.

By 1963, there were only 417 nesting pairs of Bald Eagles in the Lower 48 states and 39 breeding pairs of Peregrine Falcons.  In 1974, there were 108 pairs of eagles nesting in Wisconsin. 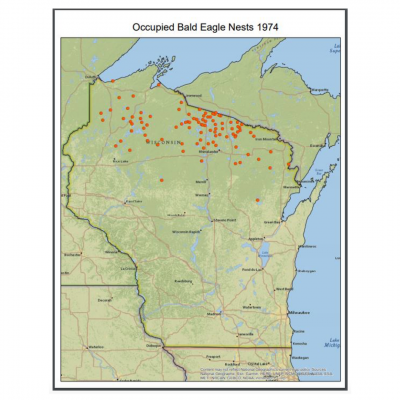 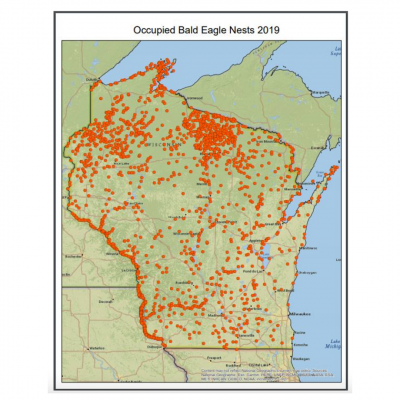 With a ban on DDT in 1972 and the passing of the Endangered Species Act in 1973, eagles and other species began their slow recovery, and a count in 2019 found more than 70,000 pairs of eagles across the country, with 1,695 in Wisconsin – a true avian success story.

The excitement over Milwaukee County’s pair of eagles was short-lived. In early April the female eagle was found on the ground, in distress. She was taken to the rehabilitation center at the Wisconsin Humane Society, but veterinarians there were not able to save her. Tests showed that the she had died from EA H5 Avian Influenza, which affects a bird’s respiratory, nervous, and digestive systems.

It’s very likely that migrating birds brought EA H5 Avian Influenza (also known as “highly pathogenic avian influenza (HPAI) Eurasian H5 strain”) to North America in early 2022. The disease apparently leapt across the North Atlantic from Europe, appearing in Newfoundland in December of 2021, and in January of 2022, it was found in an American Wigeon duck in South Carolina. The genie was out of the bottle.

Avian influenza has been making headlines in Wisconsin and nationally because the disease has been found in commercial poultry operations and in backyard flocks here and in 32 other states. The EA H5 Avian Influenza is a highly infectious strain, and the present outbreak is considered the worst in almost a decade. Poultry flocks are exposed by contact with infected wild birds or their droppings. Of the 23 million birds that have died as a result of Avian Influenza, most have been domestic fowl at poultry farms, and many of those were birds that were culled to prevent the spread of the disease.

Unfortunately, Avian Influenza is not restricted to domestic birds. Raptors and waterfowl are especially vulnerable to this strain (there have also been a few deaths reported in crows), but songbirds seem to be at a much lower risk of infection. Avian Influenza has caused a large die-off of Snow Geese in the Great Plains, and as of mid-April, the deaths of more than 36 eagles, both adults and nestlings, have been documented from 14 states. The disease is expected to affect vultures (and more eagles) as they home in on dead waterfowl.

Scientists fear that the EA H5 Avian Influenza is unlikely to burn itself out like previous strains have done and that it may persist in wild bird populations in America as avian influenzas have done in other parts of the world. Unfortunately, as a disease like this circulates in bird populations long term, the possibility of it jumping to new species increases.

At the time of this writing, experts are not recommending that people stop feeding birds, unless your feeder is near a pond and attracts wild ducks, or unless it is visited regularly by hawks. For now, follow normal feeder hygiene, keeping feeders and bird baths disinfected and not allowing a big build-up of seed or bird droppings on the ground. Domestic flocks should stay inside or in an enclosure where they don’t come in contact with wild birds.

The DNR would like to know if you find sick birds, birds that have tremors, are holding their heads in an odd position or are circling on the ground.  These reports can be made to the DNR Wildlife Hotline by emailing or by leaving a voicemail message for a return phone call at 608-267-0866. Do not handle sick or dead birds with bare hands.