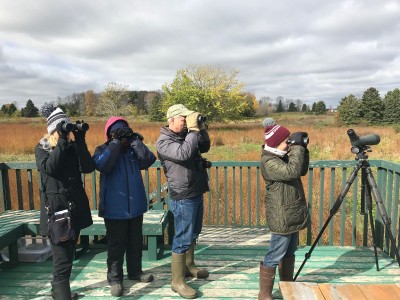 If you would like to join our group, simply email us at  and you will be included on the list of folks who receive regular updates as to optimal weather conditions for watching.

We follow a protocol established by the Hawk Migration Association of America. Volunteers record the migrating species and number of individuals at one-hour increments, using a datasheet and clipboard that are supplied at the raptor platform. The best days for raptor flights in autumn at the Preserve are when skies are clear or cloudy, with westerly, northwesterly, or southwesterly winds, and days right after the passage of a cold front.

Migration begins in mid-August with American Kestrels. Peak numbers for Sharp-shinned and Broad-winged Hawks occur in mid-to late September. Raptor migration is strong through the month of October on good weather days with the right wind conditions. It continues into early December -- for those hardy observers willing to brave cold temps -- with the last of the Red-tailed and Rough-legged Hawks, occasional Northern Goshawks, and both eagles. Peak migration at the Preserve occurs from mid-September to late October.