At a time when the State of Wisconsin has ordered all nonessential businesses to close, it’s good to know that Forest Beach Migratory Preserve and the Ozaukee WashingtonLand Trust’s other preserves remain open to the public.

If you visit Forest Beach or another preserve soon, bear in mind that we’re relying on you to help maintain them as places where we all can enjoy nature safely. You can do this, first and foremost, by adhering to all COVID-19 social-distancing guidelines. But you can also help curb the destructive behavior that prompted the recent closure of our state parks.

The Land Trust’s stewardship staff continues working at the preserves; please assist them. If you see something that causes concern, call the staff at (262) 338-1794. If you suspect illicit behavior, contact the appropriate law enforcement.

And remember, too, that the preserves have many users, and not all of them have just two legs. Some have four, six, or eight -- and some of the most important guests also have wings!

This is especially true at Forest Beach. Alone among the Land Trust’s preserves, it was deliberately rehabilitated to create varied habitats that offer resting places, sources of food, and nesting habitat for migratory birds, some of which travel extraordinary distances to reach it.

No fewer than 257 species of birds have been recorded on the preserve to date. Not all of them nest at Forest Beach, but many do. American Kestrels, Purple Martins, and Eastern Bluebirds are some of the most conspicuous, but shy Hooded Mergansers, Wood Ducks, and other waterfowl have also nested there. And bird watchers with the recently completed second Wisconsin Breeding Bird Atlas were able to confirm that Killdeer, Clay-colored Sparrow, Field Sparrow, Song Sparrow, Eastern Meadowlark, and Dickcissel all nest on the preserve and that Savannah Sparrow, Eastern Towhee, and Bobolink probably do. These species are noteworthy because they share a preference for the type of open grassy habitats found at Forest Beach. Each spends its days not high up the treetops but down low, on or just above the ground.

This means that one misstep or one free-roaming dog is all it would take to disturb a tired, hungry bird or, worse, to devastate a fragile nest. That fact -- combined with the increasing numbers of visitors and the many off-leash dogs we’ve seen these days -- is why the Land Trust has decided to prohibit all dogs at Forest Beach until August, when the birds that breed there finish nesting activities.

The staggering conclusions of a recent national report add one more compelling reason to prohibit dogs: Nearly 3 billion fewer birds exist in North America today than in 1970. That’s nearly one in three birds vanished in the last half century. Even more troubling, the report’s authors made clear that it was the grassland species -- the family that includes Forest Beach’s ground-nesting songbirds -- that have fared worst. Some 700 million individual birds across 31 grassland species have vanished since 1970, a 53% drop.

Eastern Meadowlark, the familiar yellow-breasted bird whose bubbly whistled song makes walks at the preserve such a pleasure, is one. Don’t let your lovable dog deprive another visitor of the opportunity of enjoying it.

Leave your pet at home. Stay on trails. Leave no trace. And enjoy the birdsong. 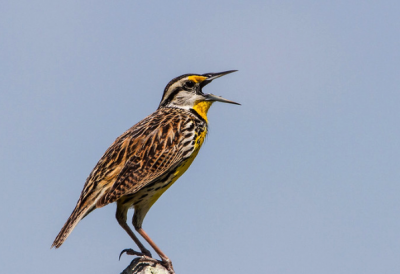