Editor's Note: Listeners to "The Larry Meiller Show" have likely heard Bill Volkert and Noel Cutright share their love and knowledge of birds on the program many times. Volkert is a naturalist and a retired Wildlife Educator at Horicon Marsh International Education Center, and Cutright is past president of the Wisconsin Society for Ornithology. Many longtime listeners often share that it just isn’t a holiday if Noel and Bill aren’t on the Ideas Network to talk about migrations, sightings, feeding tips, and the many fascinating and unexpected ways that birds behave. 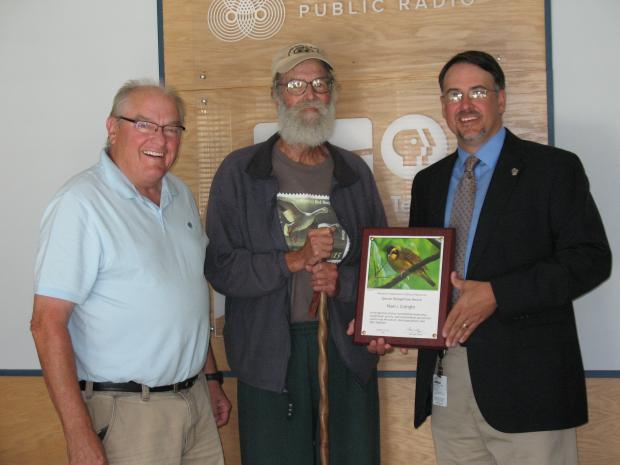 Those who tuned into Tuesday’s program might have found themselves checking the calendar since guests Bill Volkert and Noel Cutright joined host Larry Meiller for a non-holiday program to talk about fall bird migration. But, it was particularly special appearance because while they are usually on by phone, this time they came to Madison to do the show in the studio.

One of their goals is always to help people get started in birding or to improve their skills. An important aspect is to know where to go and when to observe birds at a given time of year. The fall migration is currently well-underway, and Volkert had some great recommendations for where to see specific species. Wherever you are in the state, there are great opportunities, he said.

Some of the locations that he suggested are:

But the highlight of the program was when staffers from the Wisconsin Department of Natural Resources surprised Cutright with an award for his many years of service to the state’s birds.

A native of southern Ohio, Cutright has lived for 35 years in rural Ozaukee County near the Cedarburg Bog with wife Kate, who is also a naturalist. His Bachelor’s and Master’s degrees focused more on plants, but his Ph.D. in wildlife science from Cornell University included studying flocking and roosting behavior of red-winged blackbirds, and he has been specializing in birds and bird behavior ever since.

Cutright’s accomplishments are numerous, but Sumner Matteson, avian biologist with the DNR, compiled this list:

In presenting a plaque to Cutright, DNR Lands Division Administrator Kurt Thiede said, “You’ve done and given so much in the world of bird conservation here.” He added, “In recognition of your outstanding service, leadership and passion for conserving Wisconsin’s bird populations and their habitats … we wanted to present you with this plaque of our appreciation.”

When Thiede presented Cutright with the plaque, adorned with a photo of his favorite bird, a Kentucky warbler, Cutright said, “I’ve got a lump in my throat and goosebumps on my legs. This really does mean a lot.”

Volkert added to the accolades as well. “The people of Wisconsin are certainly so much better informed about birds because of the work that Noel has done. And I have to say that I believe that the birds of Wisconsin are better off because of his contributions to both education of our wildlife resources and certainly the conservation of birds and their habitats in the state. He’s really made a mark on this state, and for that, all the bird watchers, the bird lovers and the birds themselves are thankful for all Noel has done for us."

And after the show, listener James Taylor emailed to say “Wisconsin is applauding right now. Well done, Noel.” We couldn't have said it better ourselves.