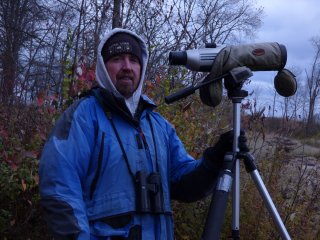 Calvin Brennan has done an excellent job on the Observatory’s Waterbird Watch at Harrington Beach State Park, with >159,000 individuals of ~174 species tallied between Sept. 1st and November 21st. Highlights included massive flights of Red-breasted Mergansers and Double-crested Cormorants, a total of 37 species of waterfowl; plus 1,261 Common Loons; 1,155 Horned Grebes; 10 Parasitic Jaegers; and more than 125 species of landbirds.  Thanks to Calvin for his excellent work. He is currently back home in Michigan, but we expect him to return for another season, starting in early March 2015.

Below is a table of the top twenty species that were identified by Calvin this fall.