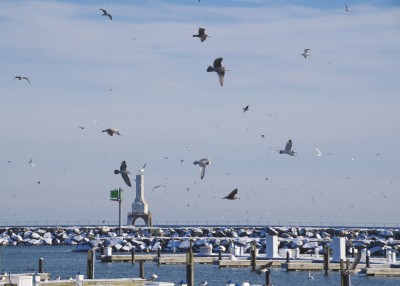 By Board member Carl Schwartz

Six hours a day, starting at dawn, for six days of the week, for three months each spring and fall Waterbird Watch technician Calvin Brennan scans the nearshore waters of Lake Michigan at Harrington Beach State Park in Ozaukee County. He just finished his 10th season doing the watch for the Observatory.

He sees phenomenal numbers of birds; records new and rare species for the count, the county and the state; and contributes to knowledge of how migratory birds use the western shore of Lake Michigan -- when, and in what numbers.

His latest tour of duty wrapped up Dec. 3, and he offered this summary to accompany his tally of 158,066 migrants:

“Diving ducks, including Red-breasted Mergansers, were somewhat low (down 32,000 from fall 2018), even given the recent extension of the season (to account for climate change). Canada Geese, Common Loons and some of the dabblers were higher than average. Parasitic Jaegers were in record numbers with a high of four in one day and perhaps most remarkable of all on an entirely separate day, were three flying southbound as a group. New species for the overall list were Red-necked Phalarope, Sabine's Gull and Pacific Loon.”