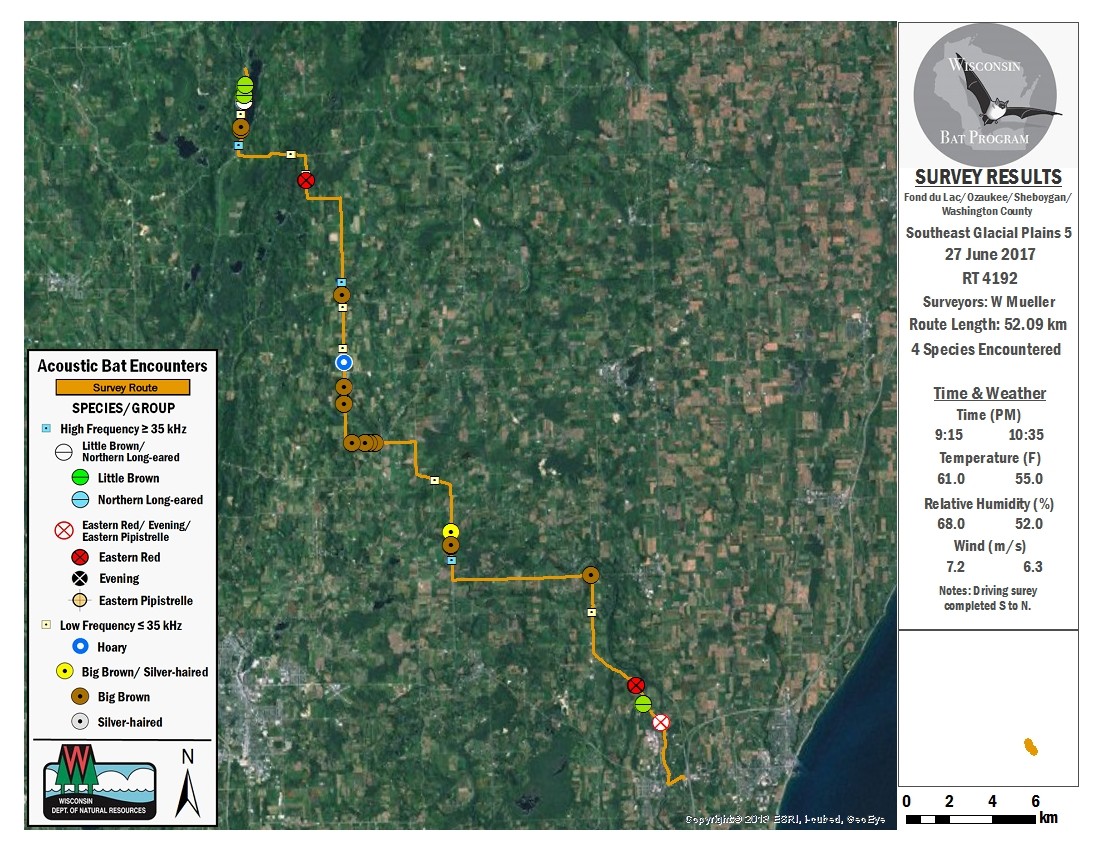 Director Bill Mueller and board member Robert Holzrichter participated in acoustic surveys as part of the Wisconsin Department of Natural Resources’ Wisconsin Bat Program last year. Using devices that detect bats’ ultrasonic echolocation calls, they and other surveyors recorded bat activity while driving transects in diverse regions of the state between June 1 and July 15, 2016. Together, the surveyors recorded a mean of 33.4 calls per detector-hour, the lowest average since surveys began in 2013. Big brown bat, silver-haired bat, eastern red bat, and hoary bat experienced increases in mean encounters frequency, but encounters of the cave species most heavily affected by white-nose syndrome (eastern pipistrelle, little brown bat, and northern long-eared bat) declined across all regions. The Observatory houses AnaBat detectors that volunteers can use to participate in monitoring program.

On a state-wide basis, according to the DNR's Wisconsin Bat News, "night-time research by Wisconsin conservation biologists is helping unlock the summer habitat secrets of several bat species threatened by white-nose syndrome, including the state's smallest bat, the eastern pipistrelle, or "pip" for short. Shown here, the pip weighs about as much as a nickel and has a wingspan of up to 10 inches, consumes small beetles, wasps and flies, and can live up to eight years. While its winter hibernation sites are relatively well known in Wisconsin, almost nothing was known about their summer habitats in the state until now. That information will help better guide recovery efforts in the likelihood that white-nose syndrome dramatically reduces their populations." .

The Western Great Lakes Bird and Bat Observatory (hereafter described in this report as WGLBBO) was awarded a State Wildlife Grant in 2011 (SWG 11- CAT2 -009); we carried out the field work and other activities described below in 2012.

Included in the activities funded and carried out as part of this grant were (a) bat ecology and monitoring workshops, (b) enlisting and training volunteers to do acoustic monitoring for bats, and (c) coordinating a group of paid surveyors doing a set of WDNR ”Batlas” routes.

Bat ecology and monitoring workshops/presentations were organized and presented by Western Great Lakes Bird and Bat Observatory staff conservation biologist William Mueller throughout January - September of 2012, at most of eastern Wisconsin’s nature centers, and at an array of other public facilities including community centers and public libraries. Workshops covered topics that included bat species of Wisconsin; general ecology and myths concerning bats; migratory species and hibernating species; status of Wisconsin’s bats, economic and ecological importance of bats; bats as providers of ecological services; how volunteers and citizens can assist in bat conservation; threats to bats including White Nose Syndrome and its spread, and wind power and bats; use of acoustic monitoring technology; providing bat houses, roost surveys by WIDNR, and information regarding the Wisconsin Bat Monitoring Program.

Locations and dates of workshops are given below in Table 1.

Paid surveyors did an extensive subset of WIDNR previously-chosen BATLAS routes (Table 2). We coordinated these surveys with the help of Paul White of WIDNR; (WIDNR personnel and volunteer surveyors also conducted other routes during 2012). One surveyor (Angela Jackson), a UW-Milwaukee graduate student, coordinated her surveys with WGLBBO, her major professor Dr. Glen Fredlund (Director of the Conservation and Environmental Studies Program and the UW-Milwaukee Department of Geography) , along with Dave Redell and Paul White of WIDNR, using the data collected as part of her master’s thesis research at UW-Milwaukee.

We coordinated, trained and assisted volunteer surveyors in completing a number of acoustic monitoring routes for bats in many southeastern Wisconsin locations. Examples of monitoring route results as mapped by WIDNR from bat acoustic data are given below.

To understand the maps and their symbols, please see this (abbreviated) legend from the WI Bat Monitoring Program.

“The maps display the route surveyed superimposed on an aerial photograph. Bat encounters along the route are indicated by a symbol that represents the species or group”. These symbols are explained below: