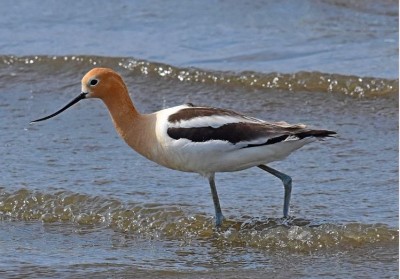 Another seasonal summary of the totals of many species observed and tallied by our technician at the Waterbird Watch is here. The technician was on duty six hours per day, six days per week, from March 1 to May 21 in the spring season.

In addition to the "Top Ten" listed below, other noteworthy sightings included 54 American Avocets, Whimbrel and Marbled Godwit, 8 Red-necked Grebes, 1 Western Grebe, and 341 Red-throated Loons.  Note that the numbers of Red-breasted Mergansers and Double-crested Cormorants were lower than in many previous seasons. The advantage of datasets collected over a long time period allows us to see trends in the data. 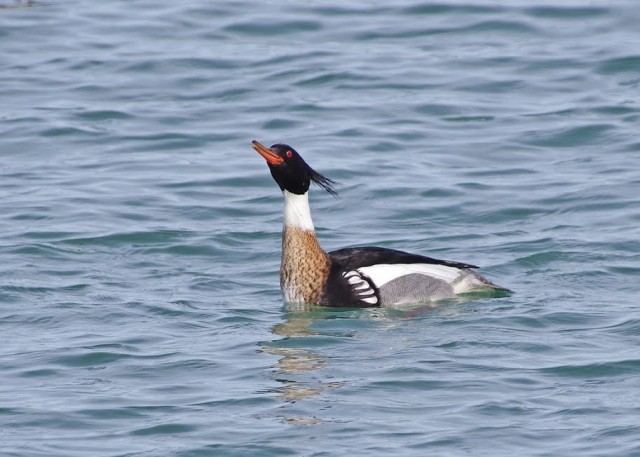 Calvin’s totals for the recently-completed fall season once again describe the massive movement of birds past our study site location. Totals for each species are:

Highlights for this fall:

Multiple Pomarine Jaegers, Parasitic Jaegers, a Swainson’s Hawk, several Black-legged Kittiwakes and Franklin's Gulls. It was once thought that jaegers were not reliably present along the western Lake Michigan shore; our watch data shows that to have been an incorrect assumption. 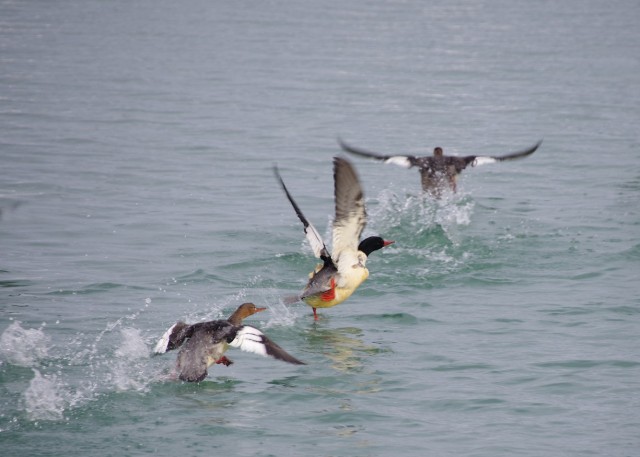 It’s not for everybody. Sometimes it’s cold. Sometimes it’s the wind. Or the eyeball-searing glare off of a sparkling Lake Michigan. There are days of rain, fog, and isolation, and days of fair weather and curious visitors. There are long lines of birds that are faint dots on the horizon, and there are “reverse migrants” that may pass by several times before finally committing to a course. And there are the hours -- six hours a day, starting at dawn, for six days of the week, for three months. But Waterbird Watch technician Calvin Brennan keeps coming back for more. He just finished his ninth season (four and a half years) doing the watch, which occurs in both spring and fall at Harrington Beach State Park.

His reward? He sees phenomenal numbers of birds; records new and rare species for the count, the county, and the state; and contributes to our knowledge of how bird species use the western shore of Lake Michigan as a migratory corridor, and when, and in what numbers.

The Waterbird Watch was originally scheduled to run from March 1 to May 20 and from September 1 to November 20. The first watch technician was Seth Cutright, in the spring of 2012. The second was Jonathan Stein, and the third was Calvin, who joined the project in the fall of 2014. Counters are stationed on a point that juts into the lake, allowing a good view to the north and south, and there’s a small blind that gives some shelter from the elements (though it can be colder inside the blind than outside).

The purpose of the counts is to quantify both the timing and the numbers of migrating waterbirds (geese, ducks, loons, grebes, cormorants, pelicans, shorebirds, and wading birds) that navigate along and off the shoreline. Land birds are counted when doing so doesn’t distract from the counter’s main mission, and about 175 species of birds are seen during a count period. Along with adding to our understanding of avian behavior, these data would provide an invaluable head start in assessing potential impact if a project like an offshore wind farm were proposed.

The mechanisms that drive migration are different in the fall than they are in the spring. In spring, increasing daylight hours stimulate hormones that cause migratory birds to feed and to put on the fat that will sustain them during their long flight. Fall migration is food-driven -- when the pond ices over, or the mud freezes, or the insects disappear, it’s time to head south.

Not surprisingly, weather plays a big part in species seen and in count totals. A long, cold spring with a stubborn ice pack slows migrants considerably but can result in some big days when the birds finally break through. These conditions resulted in a single-day count of 700 Common Loons in the spring of 2018, out of a seasonal total of 4,240 loons. One unanticipated result of analyzing the count data is that the count period itself has been tweaked. Because our recent mild falls don’t inspire the birds to move in their historical timeframe, the count period has been extended into the first week of December.

Almost 187,000 birds were counted in the fall 2018 count. The count average is about 176,000, but the highest total (so far) was the fall 2017 count, when 219,747 individuals were seen. Red-breasted Mergansers, one of the diving ducks, are usually the most numerous. Their fall 2017 total of 157,711 surpassed the total count for all species in the spring of 2018. Double-crested Cormorants, Long-tailed Ducks, and various species of gull generally vie for second place. To see the top ten species for each count on our website.

Top Ten Species and Total for All Species

Here are the top ten species tallied at the Waterbird Watch. The season period ran from September 1 to December 5. We stayed at the Watch site longer this fall, due to the reasons mentioned below.

The total is the highest out of the past 7 seasons.

Calvin return to start the Spring season on March 1.

Please visit Calvin at the WGLBBO blind just south of the rocky point on the shoreline (south of the main beach). He will be there in spring for six hours per day, Monday through Saturday, starting at dawn.

Diving ducks are migrating later, reflecting frequently-delayed freeze-up in areas to the north of us here in Southeast Wisconsin.

Temperatures are staying relatively mild well into late November, with the result that species such as Greater Scaup do not appear in large numbers until December, weeks later than formerly.

More reading on this topic: